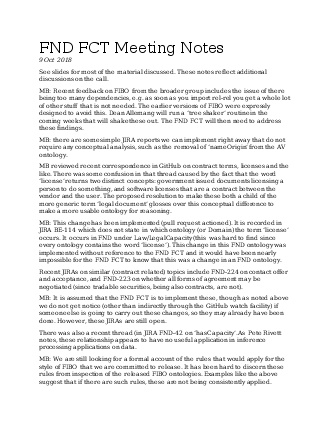 See slides for most of the material discussed. These notes reflect additional discussions on the call.

MB: Recent feedback on FIBO from the broader group includes the issue of there being too many dependencies, e.g. as soon as you import rel-rel you get a whole lot of other stuff that is not needed. The earlier versions of FIBO were expressly designed to avoid this. Dean Allemang will run a ‘tree shaker’ routine in the coming weeks that will shake these out. The FND FCT will then need to address these findings.

MB: there are some simple JIRA reports we can implement right away that do not require any conceptual analysis, such as the removal of ‘nameOrigin’ from the AV ontology.

MB reviewed recent correspondence in GitHub on contract terms, licenses and the like. There was some confusion in that thread caused by the fact that the word ‘license’ returns two distinct concepts: government issued documents licensing a person to do something, and software licenses that are a contract between the vendor and the user. The proposed resolution to make these both a child of the more generic term ‘legal document’ glosses over this conceptual difference to make a more usable ontology for reasoning.

MB: This change has been implemented (pull request actioned). It is recorded in JIRA BE-114 which does not state in which ontology (or Domain) the term ‘license’ occurs. It occurs in FND under Law/LegalCapacity (this was hard to find since every ontology contains the word ‘license’). This change in this FND ontology was implemented without reference to the FND FCT and it would have been nearly impossible for the FND FCT to know that this was a change in an FND ontology.

Recent JIRAs on similar (contract related) topics include FND-224 on contact offer and acceptance, and FND-223 on whether all forms of agreement may be negotiated (since tradable securities, being also contracts, are not).

MB: It is assumed that the FND FCT is to implement these, though as noted above we do not get notice (other than indirectly through the GitHub watch facility) if someone else is going to carry out these changes, so they may already have been done. However, these JIRAs are still open.

There was also a recent thread (in JIRA FND-42 on ‘hasCapacity’. As Pete Rivett notes, these relationship appears to have no useful application in inference processing applications on data.

MB: We are still looking for a formal account of the rules that would apply for the style of FIBO that we are committed to release. It has been hard to discern these rules from inspection of the released FIBO ontologies. Examples like the above suggest that if there are such rules, these are not being consistently applied.

All agreed that this property would not have a place in an application ontology (and therefore in released FIBO) whatever these rules might be. It is a conceptual ‘truth maker’ and unlike some such, there is no corresponding ‘data surrogate’ in the operational data realm.

At last week’s FIBO Workshop in Ottawa, Elisa stated that we would not see these rules formally defined any time soon, and that these would be reflected in her upcoming book when that is completed.

RN: We should review our current style of working, which has been to work out the conceptual representation of concepts (e.g. Products, Services in recent work) and then try to discern how to represent these in the style of ontology that is appropriate for FIBO Release. It seems that even quite simple proposed changes get knocked back on review by the broader FIBO team.

MB: In the absence of documentation of these conceptual to operational transformation heuristics, it is going to be hard to proceed on this basis.

Discussion: should we continue to work on this basis?

Resolution: No. Starting now, we will simply work our way through the JIRA issues as reported, implementing the changes recommended by those who raised them.

All agree to this.

At our next ‘homework’ call we will review a couple of these JIRAs such as FND-223 and FND-224 and see if any semantic analysis of these is justified or needed. For more mechanical JIRAs such as the removal of nameOrigin, the practice has been not to discuss with the group in any case.

Starting now, we will simply work our way through the JIRA issues as reported, implementing the changes recommended by those who raised them, without further conceptual analysis, unless a requirement for this is expressly indicated in the JIRA.