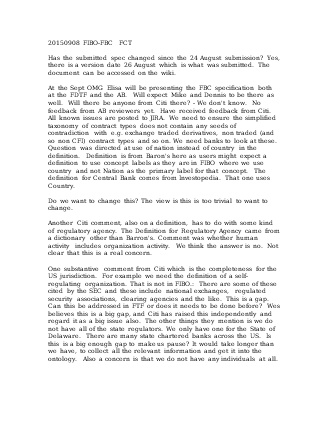 Has the submitted spec changed since the 24 August submission? Yes, there is a version date 26 August which is what was submitted. The document can be accessed on the wiki.

At the Sept OMG Elisa will be presenting the FBC specification both at the FDTF and the AB.  Will expect Mike and Dennis to be there as well.  Will there be anyone from Citi there? ­ We don't know.  No feedback from AB reviewers yet.  Have received feedback from Citi.  All known issues are posted to JIRA. We need to ensure the simplified taxonomy of contract types does not contain any seeds of contradiction with e.g. exchange traded derivatives, non traded (and so non CFI) contract types and so on. We need banks to look at these.  Question was directed at use of nation instead of country in the definition.  Definition is from Baron's here as users might expect a definition to use concept labels as they are in FIBO where we use country and not Nation as the primary label for that concept.  The definition for Central Bank comes from Investopedia. That one uses Country.

Another Citi comment, also on a definition, has to do with some kind of regulatory agency. The Definition for Regulatory Agency came from a dictionary other than Barron's. Comment was whether human activity includes organization activity. We think the answer is no.  Not clear that this is a real concern.

One substantive comment from Citi which is the completeness for the US jurisdiction. For example we need the definition of a self-regulating organization. That is not in FIBO.: There are some of these cited by the SEC and these include national exchanges,  regulated security associations, clearing agencies and the like.  This is a gap. Can this be addressed in FTF or does it needs to be done before?  Wes believes this is a big gap, and Citi has raised this independently and regard it as a big issue also.  The other things they mention is we do not have all of the state regulators. We only have one for the State of Delaware.  There are many state chartered banks across the US.  Is this is a big enough gap to make us pause? It would take longer than we have, to collect all the relevant information and get it into the ontology.  Also a concern is that we do not have any individuals at all.

DWiz reminds us this is the beginning of the process not the end.  There is no good reason to stay still for another 3 months.  We will have addressed these issues in the next 3 months anyway.

RB:  Are these enough of a show stopper that we would not get through the OMG Process?  EK: Highly unlikely. So we will forward.

Also the comment about OTS is incorrect. The gaps with respect to exchanges and self-regulating originations can be addressed in FTF.   A main concern is the lack of feedback so far.  We look at some possible issues that might be show stoppers, and for which we have not had much feedback.

For example, Elisa was working through some individuals ­ here we go to protege to look at these. Created an individual for DTC.  This is a kind of Central Counterparty Clearing house. Federal web resource we are using finds TC and says thy are insured by the FDIC. Note the complex relationship between DTC and DTCC.  Elisa took away one of the restrictions as these were being inferred to be a depositoryInstitution. not seeing that now. They are inferred to be a depository institution because the FDIC insures them. However the NIC website is not up to date ­ thy are still considered a non depository trust company even though they are FIC insured, which has within it the definition that one has to be a depository institution. So there is some odd rule which, given that DTC are briefly a depository for someone's stuff while it is in process, before handing off to HSBC. This causes a weird state that DTC gets into, which constructs the rules we have baked into the ontology. We need to review the definitions for depository institutions and for FDIC insurance as these may be to limiting. See FBC­58.

There are also some smaller issues that have come up in recent conversations. These are logged in JIRA.  For instance Obliged in Payment. Payer and Payee need clarification of the definitions.  Party identifier in Foundations should be the parent for the identifier for any party in role ­ don't have that yet.  Also a JIRA issue for where we need the EU examples, and the above one above them assign definitions for self regulating entity.  Bankers Acceptance has a typo in it.  How to incorporate examples we haven't really talked about.  Also there are some old JIRA issues around LEI and some BE reconciliation actions. Also need to review the list of regulators with David ­ some of them are in the OWL but somehow not in the specification document.

Also discussions about SROs, we are missing e.g. FINRA and others.

FBC­53 definition of account holder does not include nominee and should. Maybe other things we would need to include. Also what happens with nominee account holders? Bruce questions other aspects of trusts that are quite esoteric, for example the unborn as beneficiary.

Jeff Braswell wanted us to tweak the definition of Financial Instrument again. The original definition from ISO 20022 and CFI was an iteration of a set of members of a union, which only covered the secondary markets. Now that Financial Instrument is ancestral to the broader range of kinds of contract, it is right that this is re­framed (it is a different concept). Jeff wanted to tweak this further by a couple of words.  When you purchase a financial instrument for e.g. equity you are actually purchasing apart of the company rather than a piece of the contract.  The original ISO 20022 and CFI definition can be seen in the example annotation now.  We do not have a definitive source of the definition.  The new definition is somewhat unreadable.  Since this is now a broader set of kinds of contract, the definition should really be quite simple. It should reflect that it is a kind of written contract that [whatever distinguishes it from other kinds of written contracts]. Since the old FIBO ontology semantically reflected the limited meaning of financialInstrument as defined in ISO 20022 and CFI, it is right that we now have a broader definition since the current ontology has Financial Instrument as being ancestral to the hole range of things we deal with.

Conclusions:  No show stoppers at present. The issues whereby the DTC inferred to be both depository and non depository, this needs to be fixed (see above). This revolves around insurance.  Q: Is the insurance definitional of the kind of thing, or is it regarded as a clue that it is a given kind of thing?  The insurance is used as evidence for a thing being a given class, not definitional of it being that class of thing.   So we are using facts about insurance as a kind of proxy for the actual facts of the matter. If you are a given kind of thing, it then follows that you have to be insured to be that kind of thing.  Note that pellet draws one set of inferences, and TrOWL does not draw that inference. The restrictions in use for the above use cardinality, and Elisa says that means they are not defining a necessary condition.  If we had someValuesFrom then both Pellet and TrOWL would regard this as a necessary condition and would draw the same inference. TrOWL does not regard the cardinality restriction as being a necessary condition even though Pellet does.  TrOWL recognizes a distinction between cardinality restrictions and the allvalues  and somevalues types of restrictions.  Up to now we all thought that whether something is a necessary condition was simply a matter of whether it is an equivalent class or a sub class of the restriction, regardless of the restriction type. so TrOWL teaches us a new nuance about how these restrictions work. We need to understand this, and raise a bug on whichever of these reasoners turns out to be incorrect on this. Mike Uschold and Dean Allemang interpret the meaning of a restriction based on what Pellet says.  Dean and Mike U prove logically, regardless of the reasoners, what was being shown, and that in this case the two were identical. Elisa notes there are reasons why you would use one kind of restriction over the other depending what you are trying to say, but has not been able to get clarity from the experts (Patel­Schneider and McGuinesss), but this is a DL nuance we need to find out the industry consensus one. Elisa will also ask Evren Sirin and Jeff Pan what is happening here.  www.cs.vu.nl/~guus/public/owl-restrictions/