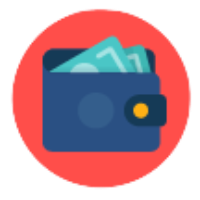 Attendees  (listed in the minutes below) 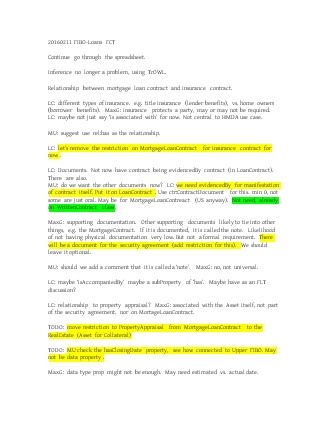 Continue go through the spreadsheet.

LC: different types of insurance. e.g. title insurance (lender benefits), vs. home owners (borrower benefits).  MaxG: insurance  protects a party, may or may not be required.  LC: maybe not just say ‘is associated with’ for now. Not central to HMDA use case.

MU: suggest use rel:has as the relationship.

LC: let’s remove the restriction on MortgageLoanContract for insurance contract for now.

LC: Documents. Not now have contract being evidencedBy contract (in LoanContract). There are also.
MU: do we want the other documents now?  LC: we need evidencedBy for manifestation of contract itself. Put it on LoanContract. Use ctr:ContractDocument for this. min 0, not some are just oral. May be  for MortgageLoanContreact (US anyway). Not need, already on WrittenContract class.

MaxG: supporting documentation. Other supporting documents likely to tie into other things, e.g. the MortgageContract. If it is documented, it is called the note.  Likelihood of not having physical documentation very low. But not  a formal requirement. There will be a document for the security agreement (add restriction for this).  We should leave it optional.

MU: should we add a comment that it is called a ‘note’.  MaxG: no, not universal.

LC: maybe ‘isAccompaniedBy’ maybe a subProperty of ‘has’.  Maybe have as an FLT discussion?

LC: relationship  to property appraisal?  MaxG: associated with the Asset itself, not part of the security agreement, nor on MortageLoanContract.

TODO: move restriction to PropertyAppraisal from MortgageLoanContract to the RealEstate (Asset for Collateral)

TODO: MU check the hasClosingDate property, see how connected to Upper FIBO. May not be data property.

MaxG: data type prop might not be enough. May need estimated vs. actual date.

MaxG: reviewing inherited stuff can be useful, a way to spot spurious things. Good todo this later on as overall checking.

MaxG: can define original a one with no parent.  MU: maybe use parentContract?

MaxG: FOAF… hierarchies parent, ancestor/descended.  OriginalLoan is one with no antecedent.

MU: But we probably do not need that (unspoken so far).  LC: MISMO we call this a relatedLoan.  Can be related in different ways. For HMDA, just need to know if it was assumed. Maybe not a class, but just a property.

MU: I’m ok with not having a separate class, just have a classifier.  MaxG: this is where having properties on loans is generally better. Avoid too many adjectives in base ontology. Let people categorize individually. Assumed loan if has certain properties.

LC: the rel could be assumes(assumedBy), not assuming the contract, [lender] is taking possession of cash flow.  MaxG: let’s get base properties together.

MU: shall we just use assumes(assumedBy).  LC: I’m thinking we can have something like that, but not have to have a class for assumed mortgage.  MarkFriend: is it not the same loan, not related to?  MU: different contract, different names and dates.  LC: different extension of credit

Jennifer: is assuming the issue?  MU: propose use the property and not have the class.  JB: several entities want to know the origination.

LC: have the property assumes(assumedBy), this is spot on. Also there may be some tracking of the loan relationships. Maybe have relatedLoan property?  MU: agree

MaxG: nothing wrong with having concept of assumed loan, but if implement it in another namespace.  MU: exactly.  Visiteurs: loan terms carry over, assumes relationship

LC: move on to ReverseMortgage.  MaxG: reverse not necessarily associated with a Mortgage. Reverse loan is secured.  LC: is it really a mortgage? Is going in reverse really a characteristic of how mortgage works?

Max: clearly tease out what is happening.  In fact, Lender buys the house, and the mortgage repayments.   Is most closely associated with a leaseback arrangement, sell something and then lease it back.

LC: need not be for the whole amount of the value.  LC: Max saying, we promote reverse loan contract to not be under MortgageLoanContract. Then we need to describe its properties.  Are there obligations to pay, to repay etc., flow of who does what?

LC: use case for HMDA, just need to know if a reverse or not. Need to know how principal limit is calculated. Need to clarify exactly what this is. Max can you look into this?  Max: I will ask colleagues, not my expertise.

LC: we will pick this up again next week with ReverseMortgage.

LC: some action items about active information, need to connect with Jeff on this.  Jennifer, can you walk us through that?

1.      remove the restriction on MortgageLoanContract to insurance contract DONE

2.      add restriction requiring security agreement to be evidencedBy a document. DONE
QUESTION: is a SecurityAgreement a WrittenContract? If so, not need this restriction.

4.      Look at hasClosingDate property, see how to connect to upper FIBO. Probably should be an object property. MOOT