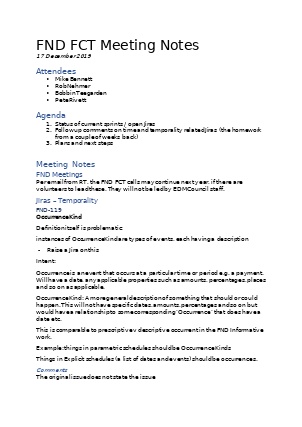 Per email from RT, the FND FCT calls may continue next year, if there are volunteers to lead these. They will not be led by EDM Council staff.

Definition itself is problematic:

instances of OccurrenceKind are types of events, each having a description

Occurrence is an event that occurs at a particular time or period e.g. a payment. Will have a date, any applicable properties such as amounts, percentages, places and so on as applicable.

OccurrenceKind: A more general description of something that should or could happen. This will not have specific dates, amounts, percentages and so on but would have a relationship to some corresponding ‘Occurrence’ that does have a date etc.

This is comparable to prescriptive v descriptive occurrent in the FND Informative work.

Example: things in parametric schedules should be Occurrence Kinds

Things in Explicit schedules (a list of dates and events) should be occurrences.

The original issue does not state the issue

Two examples are referenced (CFTC) without details of what those would mean.

It is unlikely that the two examples given in the Comment would mean the same thing. It seems this Jira was calling for some connector without regard to its semantics.

We need to know more of the Use Case(s)

Conclusion: Either way, the solution as proposed is rejected.

Meaning of the issue: it is saying that days of the week are instances of time interval and that this is a problem (not that this is what it should be)

NB we can edit meaningless or incomplete Jira titles.

EK is not addressing the specific issues raised, in responses here.

These are the wrong kind of thing

Calling the class DayOfWeek is confusing if the intended meaning is the occurrence (repeated occurrence of eg. Tuesday).

The underlying question relates to the distinction between a Duration (a length of time, not anchored to a specific time), and a Period (a length of time with a given start, end and duration).

Not clear which of Duration or Period as generally understod, the ‘interval’ notion is intended to support.

Even if Day of Week is defined as being either of those it would be wrong.

Actually we talk of DoW as an instant, with a granularity of Day. So it is not either.

PR disagrees with EK last comment: ‘Friday is not 'every Friday', it's 'some Friday', fyi.’

Not how it is used, e.g. Fed published IR every Tuesday, is how it is to be used in the ontology.

Surely we should be able to point to Tuesday in order not only to say ‘this happens every Tuesday’ but also to say ‘this may only happen on a Tuesday’.

Conclusion: there remains a problem to be addressed.

This was raised by one of the OMG AB reviewers, who seems to refer to two distinct notions: the idea of the end of a day as a point in a business process and the end of day in the sense used in end of day exchange pricing.

To PR question, we mean the 2nd one (end of day pricing)

Status: Remains to be done. Or we might already have that in Provisional or Informative.

We do have EoD pricing in Provisional ontologies for temporal concepts. But are any of these parametrized by pointing to End of Day?