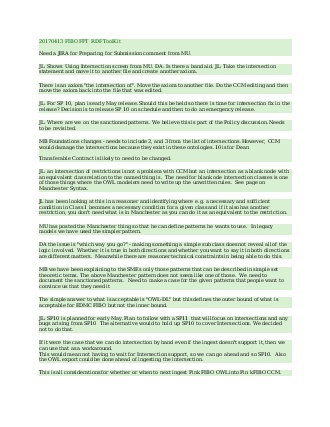 Need a JIRA for Preparing for Submission comment from MU.

JL: Shows Using Intersection screen from MU. DA: Is there a band aid. JL: Take the intersection statement and move it to another file and create another axiom.

There is an axiom "the intersection of". Move the axiom to another file. Do the CCM editing and then move the axiom back into the file that was edited.

JL: For SP 10, plan is early May release. Should this be held so there is time for intersection fix in the release? Decision is to release SP 10 on schedule and then to do an emergency release.

JL: Where are we on the sanctioned patterns. We believe this is part of the Policy discussion. Needs to be revisited.

MB Foundations changes - needs to include 2, and 3 from the list of intersections. However, CCM would damage the intersections because they exist in these ontologies.10 is for Dean

Transferable Contract is likely to need to be changed.

JL: an intersection of restrictions is not a problem with CCM but an intersection as a blank node with an equivalent class relation to the named thing is.  The need for blank ode intersection classes is one of those things where the OWL modelers need to write up the unwritten rules.  See page on Manchester Syntax.

JL has been looking at this in a reasoner and identifying where e.g. a necessary and sufficient condition in Class 1 becomes a necessary condition for a given class and if it also has another restriction, you don't need what is in Manchester as you can do it as an equivalent to the restriction.

MU has posted the Manchester thing so that he can define patterns he wants to use.  In legacy models we have used the simpler pattern.

DA the issue is "which way you go?" - making something a simple sub class does not reveal all of the logic involved.  Whether it is true in both directions and whether you want to say it in both directions are different matters.  Meanwhile there are reasoner technical constraints in being able to do this.

MB we have been explaining to the SMEs only those patterns that can be described in simple set theoretic terms. The above Manchester pattern does not seem like one of those.  We need to document the sanctioned patterns.  Need to make a case for the given patterns that people want to convince us that they need it

JL: SP10 is planned for early May. Plan to follow with a SP11 that will focus on intersections and any bugs arising from SP10  The alternative would to hold up SP10 to cover Intersections. We decided not to do that.

If it were the case that we can do intersection by hand even if the ingest doesn't support it, then we can use that as a workaround.

This would mean not having to wait for Intersection support, so we can go ahead and so SP10.  Also the OWL export could be done ahead of ingesting the intersection.

This is all considerations for whether or when to next ingest Pink FIBO OWL into Pin kFIBO CCM.

OwnershipAndControl in FND seems not have a diagram which suggests it was not in OMG spec. MB to look at spec and see

Was OwnershipAndControl put in (via BE) when Bobbin and Elisa were working on a submission or when MB was doing the submission stuff?  BT does not recall this.

Conclusion: Go ahead and so SP10 without waiting for Intersection. All have agreed.

For this decision, this is sufficient. What we want to bring up in FLT is the whole/broader pattern and generally documenting what sub-set of  OWL-DL we consider to be good FIBO form.

This policy question - we need MU to publish the relevant policies as a Style Guide for use of OWL in EDM Council FIBO publications.  This style becomes a contract between EDMC and vendors like NoMagic about what they need to support for edits, ingests and so on.

DW:  When JG brought up that NoMagic has a monopoly, and CC said that's not so since SMIF is a profile that any tool can support.  Is that the case?  MB: This is true of all OMG standards.  BT: This would be true once SMIF is published but it is not yet a published spec.  It is on the way to becoming a standard but has not yet been approved yet. The activities are open to other vendors who want to participate.